North Park sign near the intersection of 30th Street and University Avenue at dusk. 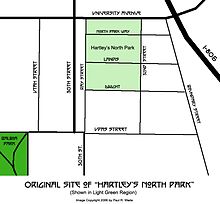 North Park is a neighborhood in San Diego, California, United States, as well as a larger "community" as defined by the City of San Diego for planning purposes.[1] The neighborhood is bounded:[2]

The pre-Interstate 805 boundary of North Park was widely considered to be 35th Street, which is now part of City Heights.

It includes the sub-neighborhoods of Burlingame, Altadena, and the Morley Field area (site of the Dryden Historic District). North Park is part of the 53rd congressional district, and San Diego City Council District 3.

The "community" of North Park as defined for planning purposes includes University Heights on the north and Juniper Canyon as the southern boundary, thus including as far southeast as Cedar Ridge Park in the officially defined community.[1]

The North Park sign can be seen at 30th Street and University Avenue, and this intersection is considered to be the heart of the neighborhood.

In the summer of 1893, San Diego merchant Joseph Nash sold 40 acres (16 ha) of land northeast of Balboa Park to James Monroe Hartley, who wished to develop a lemon grove. The Hartley family began the arduous process of clearing the land to prepare the earth for the grove, but providing the fledgling trees with proper irrigation was always a problem. Barrels of water had to be hauled from downtown San Diego up a wagon trail that eventually was called Pershing Drive.

Later in the 1910s, North Park became one of the many San Diego neighborhoods connected by the Class 1 streetcars and an extensive San Diego public transit system that was spurred by the Panama-California Exposition of 1915 and built by John D. Spreckels. These streetcars became a fixture of this neighborhood until their retirement in 1949.[7][8]

North Park was the site of the crash of PSA Flight 182, California's deadliest aviation accident to date.[9]

Although North Park 92104 is a neighborhood of mixed architectural styles from many eras, one area of note is the Morley Field area of North Park. Named for its proximity to Balboa Park's Morley Field Sports Complex, this area is lined with turn-of-the-century Craftsman Bungalows and California Bungalows. Because many of the homes were designed by renowned designer and builder David Owen Dryden, the area is the site of the "Dryden Historic District." This historical district includes the homes along 28th and Pershing Streets, both bordered on the south by Upas Street and to the north by Landis Street. North Park Dryden Historic District was approved by Historical Resources Board on June 23, 2011 An application for designation of 28th Street and Pershing Avenue from Upas to Landis Streets as a historic district was filed with the City of San Diego Historical Resources Board in May 2007. In September 2008, City staff requested additional information. The Working Group submitted a Supplemental Application in January 2009. The Supplemental Application discusses why the neighborhood reflects significant elements of North Park's development, justifies the proposed district boundaries and nominates Edward F. Bryans, who built more than a dozen homes in the proposed district, as a Master Builder.[10]

On June 23, 2011, the City's Historical Resources Board (HRB) approved, by a vote of 8-0, establishment of the North Park Dryden Historic District and also approved Edward F. Bryans as a Master Builder. Of the 136 homes in the District, 104 were approved by the HRB as contributing resources to the District.[10]

As evidenced above, interest in the history of North Park (especially its architecture) appears to be growing. Helping to foster this interest and awareness is the North Park Historical Society, a local volunteer civic organization. The North Park Historical Society manages a website which contains many articles about historic sites, people and events; North Park walking tours; and information about committee projects and meeting information. Some of the site's extensive collection of articles on North Park's history were written by Donald Covington - historian, Dryden Expert and North Park enthusiast.[11]

In 2012, Forbes named North Park as one of America's best hipster neighborhoods, noting that "culturally diverse North Park is home to Craftsman cottages, cafes and diners, coffee shops, several microbreweries, boutiques, and the North Park Farmers Market. The North Park Theater and the Ray Street Arts District are also bastions of creativity in the area" [12]

The Los Angeles Times writes: "North Park has all the ingredients for the cool school: It's culturally diverse and has art galleries, boutiques, trendy bars with handcrafted cocktails and local brews, and foodie-approved eateries."[13]

An eclectic and diverse array of restaurants, as well as independent coffee shops, can be found along the main arteries of 30th Street and University Avenue. The area is also dotted with bars and night clubs that cater to a wide diversity of patrons. The Linkery used to be in the neighborhood. Eppig Brewing now occupies the same space.

Downtown North Park contains the Ray Street Arts District. Ray at Night is a gallery walk held the second Saturday of every month in North Park. It is the largest and longest running art walk in San Diego's history.

Nearby, the Observatory North Park, a concert venue, occupies the former Birch North Park Theatre, the former home of Lyric Opera San Diego.[14] The historic theater underwent major renovations in 2005. The permanent seats were removed in 2015 for its new use.

The San Diego Music Foundation hosts a large musical festival—North Park Music Thing[15]—in the fall on El Cajon Boulevard, which helps add to North Park's reputation as a great community for the arts in San Diego.

Like other urban San Diego communities, North Park has a high rate of pedestrian activity, relative to other regions of San Diego County.

Transportation is served by Interstate 805, which is accessible from the University Avenue and El Cajon Boulevard exits.

University Avenue and El Cajon Boulevard are the major east-west thoroughfares in North Park. University Avenue leads west to Hillcrest and east to City Heights and La Mesa. El Cajon Boulevard leads west to Washington Avenue and Mission Hills and continues east to the city of El Cajon. Florida Street connects North Park to Downtown San Diego through Florida Canyon in Balboa Park to the south, and to Adams Avenue and University Heights to the north. 30th Street connects North Park to Adams Avenue and Normal Heights to the north, and to South Park and Golden Hill to the south. Texas Street heads north directly into Mission Valley.

There is substantial bus service (bus routes 1,2,6,7,10,11, and 215 connecting to Downtown San Diego as well as to the transportation hub in Old Town). The busiest bus line corridor in the San Diego metro region, known as the University Avenue transit corridor (bus routes 7 and 10), traverses North Park.[16]

The United States Postal Service operated the North Park Post Office at 3791 Grim Avenue. This post office was closed in July 2011 due to budget cuts in the postal service.[17]